Welcome to the channel

I made a number of blogs on WordPress That May interest you:

This Blog has moved to Wordpress

Starting today this blog has moved to : iladdie.wordpress.com

Thank you for reading this blog! All my posts have been copied to Wordpress.
Posted by Unknown at 17:05 No comments:

Whiskey Sour, what is that?

I have been wondering about Whisky Sour. I am clueless what it is and in this blog I will try to find out:

There is nothing much on here now, but I will add content as I learn it.

What is a Whiskey Sour?

I have looked it up and the general opinion is that the ingredients are:
Garnish like:

This sparks questions:
Looking up some of the answers. Ah, there is also "bourbon Sour"! Interesting! That would mean there might be "malt whisky sour" too! Or a "Rye Whiskey Sour".

I'm not going to say how its done, so here are some of the recipe links i found.

Experiment: I will not mention this blog on my facebook, instagram or twitter. I want to see if this blog gets read regardless of any advertising on my end.

This blog has moved to : iladdie.wordpress.com


Thank you for reading this blog! All my posts have been copied to Wordpress.

Compass box shares information on internet via multiple channels one of which is twitter.

Consistency in whisky is important for blends and single malts alike. I took this tweet by compass box as an opportunity to find out how whisky-makers do this.

The first thing I see are the three black ISO 3591:1977 sensory analysis - apparatus - wine tasting glasses. There glasses are prescribed when doing sensory evaluations of liquids, such as whisky. I have blogged about these glasses before. See this link.

The black glasses are to prevent the assessor from identifying any visual differences between samples by looking through a transparent glass. This prevents identifying the odd one out and thus influencing the assessor.

In total there are 17 ISO standards in the "Sensory analysis -- Methodology" section.

These are:
From the word "triangular" in the compass box tweet I deducted that this could be the ISO 4120:2004 methodology. So I asked on twitter and the answer was positive. I found a legal copy of this standard and started reading.

In the photo you see the glasses standing in a triangle. This is according to point 7.2 of the standard. Tasting is done from left to right. Two of the glasses are filled with the same sample of the product. The third glass is filled with the other sample product. Six sets of combinations of these samples are possible and the assessor is not aware of which set sample is in which glasses.

Below the glasses are three numbers. These are chosen at random by the person that is setting up the procedure. Only the person setting up the tasting knows which numbers correspond with which product. The numbers intentionally mean nothing to the assessor so to not cause bias.

The assessor in this form used by compass box fills in the number of the sample that is the one that he or she thinks is different. What is not part the standard is filling out the level off similarity on a scale from one to ten. So maybe this is not the ISO 4120 after all ;)

This last kind of test is what compass box wanted to show here. Is the new batch of hedonism so similar that the assessor cannot spot the odd one out.

The standard gives a definition for “similar” which reads: situation in which any perceptible differences between the samples are so small that the products can be used interchangeably

I trust the batches were indeed found similar.

I wonder how many bloggers follow these standards. I hope a lot. But I suspect very little even have the slightest notion. This needs to be remedied. In blogs to follow I shall go into these standards one by one so I can educate myself. That is, if I can find copies of the standards ;)
Posted by Unknown at 15:07 No comments:

Email ThisBlogThis!Share to TwitterShare to FacebookShare to Pinterest
Labels: Nerd

This blog has moved to : iladdie.wordpress.com

Thank you for reading this blog! All my posts have been copied to Wordpress.

I had a night to myself last night. My wife's sister had come by to talk and this was an option for me to retreat to my "office"  and really take the time to nose and taste the Laddiemp4 drams.

I had wished I would have been able to join the live tasting on October 13th when I rather coincidently was on Islay. I had asked at the Laddie Store to the guy behind the counter if he could do me a really really big favour. He called in the aid of Ailse and she asked Adam. Adam was Adamant ;) ... the place was full. I got a bottle of the 16-062 so console me ... it has consoled me as the picture below shows. 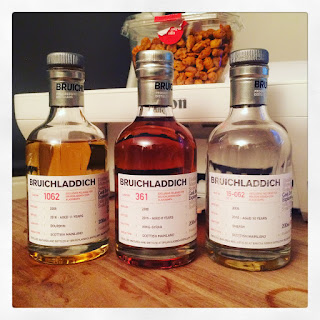 I had been tasting my second bottle of the 16-062 more than the others. I had postponed it till a propper time. The time was now. I had cleaned three glasses. I had gotten a glass of water and a teaspoon. I had also gotten a pack of "Katjan Pedis" nuts, which I sat aside for later because this stuff will totally overpower your palette.

Guided by Adam Hannett on Youtube I am all set.


I have made an excel version of the scotch whisky tasting wheel. Divided into the Wishart taste groups. I plan to use that to log my tasting notes. It doesn't work editing an excel file and at the same time nose and taste, so this nerdy need needed to wait for later. Make notes with pen and paper is what I do.


Starting of with the Cask #361 Syrah matured whisky.

Nose:
Taste:
If you are wondering why the Heineken can is on top of my glass. That is because I did not bring covers from downstairs. Got some fun comments online on my instagram. 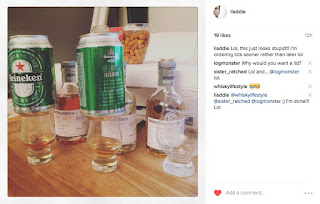 Anyways, with this Syrah I had been wondering what notes I would get from this. Turns out the dried dark fruit notes which you typically get from Sherry matured casks are not in here as the predominant notes. My first reaction to this dram was "Cask 361 is friggin amazing". The orange and chocolate you would also get in a sherry matured dram are there. But not so much the salty influences of the floral notes. Interesting!!

Nose:
Taste:
Wokkels? Yes Wokkels. I had gotten this note before on a USA Dram from Koval also. I am suspecting the crispy cloy taste of these pretzels find their origin in the malt. This is where tasting notes don't translate internationally. I actually blogged about culturally dependant notes in the past.
This dram is also not a typical Sherry. This is probably because it is a combination of woods. I re-watched the part where Adam explains. Its matured in first and second fill bourbon and from 2014 in PX and Oloroso casks. So this is a hybrid whisky with lots of different woods. This explains the combination of notes I got.

The third dram Cask 1062 is a Bourbon matured dram. It was matured in a Buffalo Trace cask.


This has an obvious American Oak influence
Nose:

This one for me had a real "oomph" to my palette. An "oomph" I like. I do like the notes from the sherry, but I find the floral fruity tad spicy notes from first fill Bruichladdich a beautiful thing.

I will spend more time with these drams and improve and reconfirm my notes. I found that tasting these side by side really improves the sense of differences in smell. I makes the notes stand out more. I kept the Heineken cans on there as I sat and re-smelled them all. Some notes were gone, some became available. Its beautiful how these drams develop.


Time to eat the spicy nuts and destroy what is left of my palette ;) ... Yikes! Good thing I held back for these nuts, this would have blown the night! lol

Email ThisBlogThis!Share to TwitterShare to FacebookShare to Pinterest
Labels: Laddiemp4

Some of you may know I used to buy and sell Lego as a hobby. I stopped doing so and after much internal debate I am also selling the one Item I am most proud of owning MISB. I had a weak spot for collectable Star Wars UCS Lego. So when it got cancelled some years back I bought the 10221 at retail price. Now its price almost exploded and this is the time for me to get a nice Return on Investment.

The Super Star Destroyer measures 124.4 cm (50 inches) long and is made of 3152 pieces. This set includes a redesigned IG-88 and Dengar and a new minifigure, Admiral Piett, along with a Darth Vader minifigure. The set features a smaller representation of the bridge featuring the walkway for Darth Vader, the computer panels on either side of the walkway down below where Admiral Piett takes command and the bounty hunters standing by the exit of the bridge.

The bridge.
Bossk makes his second appearance to date but his variation remains identical to the one from 8097 Slave I released in 2010. Dengar makes his second appearance to date with his first being in 6209 Slave I. Dengar has been re-designed with extra details. Admiral Piett makes his first and only appearance in this set featuring the same face used for Professor Snape in the 2010 Harry Potter sets. Darth Vader appears in his latest variation for the second time with his first being in 10212 Imperial Shuttle. This variation of Darth Vader features a cartoon like face featuring white pupils and added detail.

The set also includes a new Palpatine hologram piece which also appears in one other set, 7964 Republic Frigate.
The Executor was Darth Vader's personal flagship, serving in the Battle of Hoth, and the subsequent asteroid chase with the Millennium Falcon. The battle over Endor saw the destruction of the massive 19 km ship when Arvel Crynyd, Green Leader, rammed into its bridge in a kamikaze attack when he was hit. The Super Star Destroyer plummeted into the unfinished Death Star, causing enormous damage and killing most of the Galactic Empire's best officers.

I am selling this set so I can further finance some hardware I need for my Whisky Hobby. Hope it fetches a nice price. Now that the New Movie "Roque One" is set for later this year it should spark interest in any older vintage Lego Star Wars UCS series sets like this one. I also own a "Slave One" with Jango Fett, but I am still to emotionally attached to that set to part with it!

So Bart, from the Scotch test dummies, if you are interested ;) ..
Posted by Unknown at 12:58 No comments: